Currently, there are more than one million veterans living in the State of Ohio and approximately 540,000 residing in the cemetery’s service area. The first two phases of construction, covering 65 acres of 273-acre cemetery, included 21,000 gravesites, 10,100 columbaria niches and 3,800 in-ground garden niches for cremated remains. At full capacity, Ohio Western Reserve can provide burial space for 106,000 eligible veterans and dependents, beyond the year 2050.

Ohio Western Reserve National Cemetery lies approximately 45 miles south of Cleveland in Medina County near the town of Seville. The cemetery’s name refers to the part of the Northwest Territory formerly known as the Connecticut Western Reserve, a tract of land in Northeast Ohio reserved by the State of Connecticut when it ceded its claims for western lands to the U.S. government in 1786.

Ohio Western Reserve National Cemetery features a pathway that is lined with memorials that honor America’s veterans, which have been donated by various organizations. As of 2017, there were 139 memorials, most commemorating events and troops of 20th century war.

Who is Eligible to be Buried at Ohio Western Reserve National Cemetery?

Burial in a national cemetery is open to all members of the armed forces who have met a minimum active duty service requirement and were discharged under conditions other than dishonorable. A Veteran's spouse, widow or widower, minor dependent children, and under certain conditions, unmarried adult children with disabilities may also be eligible for burial. Eligible spouses and children may be buried even if they predecease the Veteran. Members of the reserve components of the armed forces who die while on active duty or who die while on training duty, or were eligible for retired pay, may also be eligible for burial. For more information visit our eligibility web page.

Are Spouses of Veterans Eligible to be Buried?

If the spouse of an eligible veteran passes away before the veteran, the spouse may be interred at a National Cemetery. Space for the veteran will be reserved in the same site.

What Types of Burial Spaces are Available?

This cemetery has space available to accommodate casketed and in-ground burial of cremated remains. Cremated remains may be placed in the above ground columbarium wall.

What is the Cost to be Buried?

There is no charge for any service provided by a National Cemetery, including grave space, a grave liner, the opening and closing of the grave, an upright headstone or flat marker and all perpetual grave care. 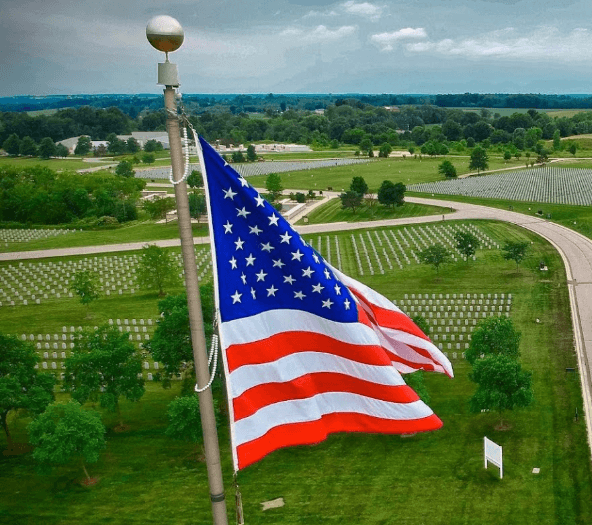 What Is Pre-Planning?
Pre-Plan Online
The Talk of a Lifetime